One September day, during my recent stay in Poland, I joined a walking tour of Jewish Warsaw. At its end, our smart and funny Polish guide informed us that fifteen hundred Jews now lived in Warsaw, a third of whom actively practiced Judaism.

That afternoon I continued walking and found the Nozyk Synagogue, which our tour had not included, and which had miraculously survived the Second World War because the Germans hadn’t located it.  Since it was a Friday, I thought I might even attend evening prayers. 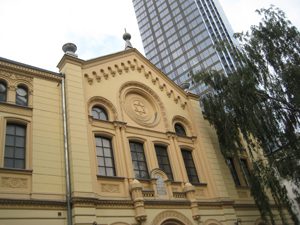 But as an American Jew turned Buddhist, I was shy and nervous about going inside, especially alone.  There was a bell to ring, and when a man asked through the intercom if I was a tourist, I stuttered.

Dejected I began walking away, my feelings of not belonging confirmed. But then I turned back and hung around near the stairs to the entry, watching as other people went in. Although I’d rarely attended Friday evening prayers, curiosity, loneliness and ancestral nostalgia had taken hold of me. In the book called Tears of the Ancestors, Daan van Kampenhout describes four aspects of soul or spirit, including the individual, the family, the tribe, and the larger or universal soul. Of the tribal soul, he writes: “Of all the possible collectives of which we are a part, the field of our ancestors has a particularly strong effect on us. . . The tribe, in its positive aspects, gives us strength, a sense of belonging, and it links us to our ancestors.”

Not sure whether to stay or go, I sat down on a bench opposite the stairs. A nice Polish woman who had been standing nearby soon spoke to me. As I understood it, she wanted to see what it was like inside, but didn’t know if it was allowed.

“Me too,” I said in Polish.  Though I was a Jew, we were in the same boat more or less.  She said she’d been living next to the synagogue for three years, and she knew there were services Friday night and Saturday. I explained that they didn’t want visitors during the services and she said she understood. After a few moments of silence, I mentioned I was Jewish and, with a natural warmth, she said she could see that. Then she thanked me and left.  Funny, in a way, that the Polish woman recognized I was Jewish and reached out to me, while the Jews walking by ignored me or eyed me suspiciously.  Of course I would not have recognized them as Jewish either, except those who wore yamulkas or other Jewish attire. My own hesitation and discomfort had made me an outsider, not them, but because of it, the Polish woman was able to approach me.

Finally I saw a thin, blonde man wearing a hat and suit hurriedly approaching, the fringes of his prayer shawl hanging below his outer garments. He looked to be in his thirties.  I asked if he spoke English and when he said yes, I asked if I could come to the Shabbat services.  With curiosity and an accent of unknown origin, he asked me nicely if I had some connection to Judaism.

Ushered inside, I joined the women upstairs who were, of course, separated from the men. There were only two women at first, then nine or ten looking down from the balcony at the thirty or so men below.

A pregnant woman’s three little girls were playing with the sheer, white head scarves their mother had given them, and I envied their natural and loving immersion in the tradition of their ancestors.  Born in the decade after the war, I grew up with plenty to eat, but starved of any sense of the past, or of knowing my place in the world.  Half a century later, I am still that child, never sure where I belong. I walked over to a cupboard where prayer books were kept, a dozen or so in Hebrew and Polish. On a side shelf, I spotted one in Hebrew and English. Inside, a white sticker with a blue border told me the book had been donated by someone from Denver, an unexpected connection to home.

Below, the men were dressed in everything from Hassidic coats to jeans and sneakers, praying and swaying, some standing, some sitting.  Here and there, the singing was robust and sweet. At the end, the six or so small children present were brought together on a green upholstered seat on the podium, or bimah, in the center, each in turn given a sip of wine or grape juice from one goblet, and offered something from a jar of sweets that looked like multi-colored jelly snakes. Just before, the men had joined hands and danced in a circle around them. Having welcomed the Sabbath, their feminine sides were exposed, along with joy. Judaism was not dead in Poland.

A few days earlier, I’d visited a Polish friend, also born in the decade after the war, to a Catholic mother and Jewish father. Devoted to her father’s memory, she practiced Judaism by herself in a town near Czestochowa. The town’s main Jewish landmark was a devastated cemetery where over eleven hundred Jews were buried. 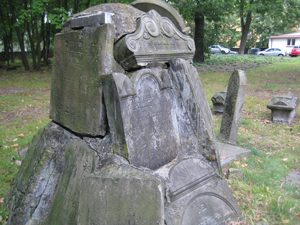 Several broken and misplaced headstones were gathered in a circular mound like an artful, sad collage. Outside the cemetery wall, an information sign reported that the town had taken steps to preserve and honor this site by relocating the driving school which previously operated here.  But the building formerly used for preparing and praying over the deceased was now a car repair shop. And cars, likely connected to a school across the street, were parked so close to the information sign that we could barely read it. 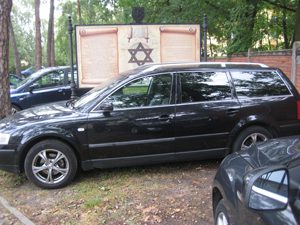 Among the cemetery’s dead were the grandparents and brothers of Edith Stein, a German Jewish philosopher-mystic born in Breslau on Yom Kippur, 1891, to observant Jewish parents. Inspired by the writings of St. Teresa of Avila, she converted to Catholicism in 1922, and in 1933 joined the Discalced Carmelite order in Cologne, taking the name Teresa Benedicta of the Cross. Five years later, she was transferred to a Carmelite monastery in the Netherlands for safety. But shortly after the Dutch church publicly condemned Nazi racism in 1942, Edith-Teresa, her sister, and over two hundred other converts were arrested and sent to Auschwitz. Years later, Pope John Paul II beatified her as a martyr, and in 1998, canonized her as a saint after confirming a miraculous healing after a poisoned child’s family prayed to her.

Jews like my parents would have said that Edith-Teresa had betrayed her tribe in converting to Catholicism. But when offered a chance to escape, she insisted on sharing the fate of her Jewish brothers and sisters.  As for her conversion, I suspect she had needed this different path to find her way to that universal dimension of soul, where “all polarities are transcended and all paradoxes are resolved”.

About the tribal dimension of soul, van Kampenhout writes “At the boundary, there is a possibility of interaction with the space outside of the tribal borders.  People at the border of the tribal soul can hold additional identities because the edges can touch and overlap with other tribal fields.”  A breath comes when I read this.  It helps me feel there is a place for me, if only at the border.

← Awakening the Heart, Blue Moon over Warsaw
Treblinka and the Ground of Basic Goodness →