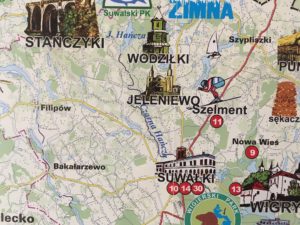 In a northeast corner of Poland, the sky is milky white over soft, wet earth covered in places with sheathes of yellow and brown leaves. All around, a soft breeze murmurs, rising and falling to a wordless melody, as Jewish New Year arrives and I track how it feels to be here once again.

I arrived six weeks ago, in late August, to attend the commemoration of the 75th anniversary of the liquidation of the Lodz ghetto – a week-long event that overflowed with ceremonies, exhibits, tours, and cultural events. It also included a presentation of my book.

The gathering was curated by the Marek Edelman Dialogue Centre, in collaboration with the City of Łódź and its Jewish community. The week of non-stop events felt overwhelming at times, due not only to the heat, but to the intensity of revisiting the past and meeting others as we walked the ghetto’s damaged streets together – all of us touched by its history in one way or another,

no matter where we came from.

Many of us bonded and became like a tribe . . . a tribe of the lost and the found. How such a gathering generates joy and connection, in the midst of acknowledging pain, is one of the mysteries and gifts of being here for me.

Before and after the commemoration, I had auspicious opportunities to return to two of the ancestral towns in my memoir – Piotrków Trybunalski and Tuszyn − and to reconnect with the same wonderful people who had helped me in 2010. The universe was bringing me full circle to rediscover those threads of connection, while offering me new ones. One of these situations involved a school teacher from Tuszyn, who’d emailed me in Colorado months earlier, seeking help to commemorate the Jewish cemetery in Tuszyn. His passionate determination amazed me. Soon he was emailing me almost every day. After arriving in Warsaw, this virtual stranger, Robert, came to pick me up and drive me to Tuszyn.

Since then, I’ve spent time in six different Jewish cemeteries, and am joining Robert in his efforts to commemorate the unmarked Jewish cemetery in Tuszyn Las, with the support of the Jewish community of Łódź and the mayor of Tuszyn, where my mother spent summer vacations with her family, and where at least four cousins were born. Not one matzevah remains on these burial grounds. Beside it is a ruined swimming pool built in the 1950s for recreational use by the Communist police.

I am told there are 1200-1400 Jewish cemeteries scattered through Poland, the vast majority untended, and many, like Tuszyn’s, unmarked and/or unknown to local inhabitants. As a Buddhist and as a Jew who feels a strong connection to the past, I have been grappling with how to think about this.

Do the dead actually need the living to physically visit their graves? Do they care whether the ground in which they are buried is fenced and cared for? If the spirit of one who has left her body lets go of that former abode soon after death to continue its journey, surely her physical remains are also left behind.

Does maintaining and protecting a cemetery serve to elevate the dead and help them on their further journey?  Or does a cemetery mainly serve the emotional or social needs of the living?  How important is the preservation of a Jewish cemetery? And when over 90% of Poland’s Jews have been lost, how can that be accomplished?

More personally, I’ve been wondering why I feel drawn to these sites. Is it the haunting, romantic beauty of the gravestones themselves, who seem almost alive? Or seeing the gradual

merging of moss and earth with these deliberate markers of remembrance?  Perhaps I feel peace in these places because the to-do list of ordinary life has been interrupted and a window into another realm is opened. The dead can share at least that much with me – a sense of invisible presence in their absence. This leads me to a paradox that draws me even more; that memory and absence of memory seem to simultaneously exist here.

A case in point is a Polish photographic project called “Obecnie-Nieobecni” (translated: “Presently Absent”) which seeks to photograph places where Jewish gravestones previously existed and have been removed or destroyed, whether through the violence of hate or the violence of ignorance. In this project, drawings of transparent matzevot are superimposed on photographs of repurposed landscapes, pavement, or other structures where actual gravestones once stood, thus restoring virtual threads of collective and ancestral memory.

What drives such an artist?  How does the sacred space of a Jewish cemetery affect, not only Jews, but contemporary Poles who are now called to be part of preserving our collective memory?

These are intriguing questions, alongside the relatively recent realization that preserving the remnants of centuries-old Jewish presence in Poland, like remnants of her own body, can only take place and grow through the collaboration of Poles and Jewish descendants.

Having dipped my toe into this realm, by seeming accident, I’ve become aware of organizations who are fostering such partnerships, including The Matzevah Foundation, and Friends of Jewish Heritage in Poland. The Matzevah Foundation was founded by Steven Reece, a Baptist minister who was stationed in Poland for 12 years. Its founding motivation is stated on its website as reconciliation between Christians and Jews. I encourage anyone interested in these efforts to check out the websites of these two non-profits.

While I may have doubts about whether the dead need us to physically care for their remains, I have no doubt that we should be reminded of them; for the power of physical sacred space is that it opens us to the invisible. In that opening, we may connect with a sense of lineage or ancestral presence, or our own larger awareness that exists eternally within the present moment through the paradox of absence and presence.

In this time of blame and polarization, it seems poignant that the preservation of these sacred ancestral sites requires a coming together of Jews and Poles. For these reasons and more, these fragile threads between the living and the dead, and between the past and the present, ask to be seen and known.

I welcome your thoughts!

← In Search of Magic at the Borderland