Buried Rivers: A Spiritual Journey into the Holocaust

The train from Munster to Brussels gathered speed until its whisper grew silent, slicing the air like a bullet leaving no mark. There were hardly any passengers, exactly how I liked it. I inhaled down to my belly, surrendering my limbs to the train’s smooth vibration as the empty space invited me to drop down and let everything go. Outside, winter’s deathly disguise was convincing. The sky was pasty grey, the earth stone-cold and featureless.

It was January, 2005, my third time in Germany. I felt mostly at ease as I did elsewhere in Europe where land and cultures had melded for centuries—except for one or two moments when the language would provoke an auditory double-take, and send it back out as German. It was the understandable hangover that anyone with a connection to the Holocaust would experience setting foot on German soil—anyone being me in this case, though I’d always resisted defining myself by my family’s past, or labels in general.

My entire adult life had been devoted to learning to live in the present moment, not to being the child of Holocaust survivors. Could those words ever be said in a matter-of-fact way? The phrase itself sucked the oxygen out of a room, demanding attention, and the attention became something else to deal with. It was all too complicated and a bit embarrassing. Everyone had a difficult childhood of one sort or another. Was it so different growing up with a mother who had survived Auschwitz? 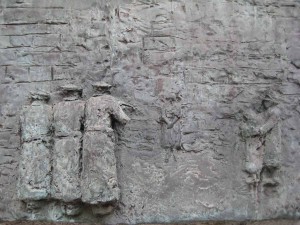 A subliminal conversation found its way into my awareness, like fish eggs washing ashore. How it all seemed so normal now. Friendly people, the Germans; intelligent and congenial, with gracious smiles . . . so very normal . . .  well-groomed and polite . . .  the shops thriving and colorful . . . everything so clean and respectable . . . so goddamn normal. People were shopping, having a good time . . . young people laughing. Had everyone forgotten so soon? Was this how life continued on, everything simply normal again?

Beyond the gaping windows of the train, dismal surroundings stretched on monotonously, the flat horizon and grey skies only punctuated by isolated sheds and wire fences as if even the trees had died. I couldn’t help thinking about a different kind of train, a destination less pleasant. My head registered a kind of atmospheric pressure in the background, like a cloud bearing down from above in the space around me. Space, especially the space of my mind and body, had always been my territory of choice, something at least partially in my control.

On rare evenings my parents went out to play cards or see a show with their friends, other Jewish immigrants like themselves. For some inexplicable reason, their leaving filled me with dread. I was certain they would be killed and never return home. I must have been about four or five, maybe even younger, when it began. I would be standing just outside the door of my parents’ bedroom, in the shadows of the hallway, watching my mom in her bra, arranging her hair and make-up in front of the mirror. Her persona would change, as a certain smile that was reserved for friends would start to bloom on her face. She was looking forward to the evening ahead, but to me she was drifting further and further away.

Something unnameable would cause my limbs to stiffen as if to stave off the feeling. But then it would begin to crash in and around me anyway. At some point the terror would jump inside the hollow feeling in my gut. Feeling more and more like a ghost, my body strangely dissolving and yet frozen, I continued to watch as she slipped on her dress and then put on her lipstick, while I remained suspended in a place between the living and the dead. When she stood up and reached for her coat, the coffin shut. It was final. I was in the darkness now. There was only me and this old, familiar nausea. My parents were never coming back.

After they left I would throw up, possessed with the ineffable certainty that they would die and never return. It was like a terrible recurring dream I couldn’t shake. Its predictability only amplified my helplessness as I tried to resist the tendrils spreading through my body like poison. There was no apparent reason, no logic. It simply was. The babysitter watched TV or studied and probably never noticed. In the morning, life somehow returned to normal, but the nightmare kept repeating.

No one ever said “Don’t worry, you’re safe, everything is okay.” My fits of terror were never talked about. My parents loved me, of course, but that was never spoken either.

Through the train’s spotless windows, I noticed an abundance of chain lin 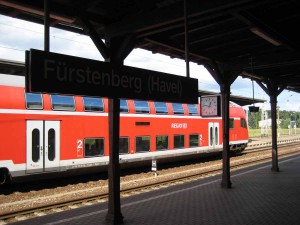 k fences topped with double or triple rows of barbed wire. Here and there, a chimney churned out smoke, darker grey than the sky. My attention was drawn to a vague heaviness above me, like a dense cloud or an amorphous swarm of insects. As I paid attention it became more real, almost palpable to some part of me, and made me curious.

Then it clicked. It was only natural that some residue of the Holocaust would be hovering over Germany. Of course! How could they not be here? The quiet space of the fast-moving train had simply allowed me to notice what was here to be noticed—a conglomeration of unresolved pain and sorrow in the atmosphere over Germany on this late January day, a leftover package of energy. It all made sense.

The heaviness became steadier, solid and unmoving, like a soup that had cooled and begun to coagulate, allowing itself to be touched or examined from all sides; yet it still seemed ordinary. I told myself anyone would notice it if they were quiet enough to pay attention. Something there in the background, as real as everything else, only not visible.

I changed seats and moved from one side of the train to the other. I’m not sure why. Perhaps to be able to face into the direction the train was moving, rather than what was behind, or to see if something would change. Nothing was different, at first. Soon we would arrive in Brussels, and soon after, I’d be in Paris. My mind wandered for a moment, and then something tickled the inside of my sternum like a feather penetrating my chest. A revolting sensation imploded inside before I could turn away—an oily putrid blackness too repulsive to inhale, like the smell of rotting meat. My muscles tightened and my head began to throb. The next moment my throat felt thick and raw.

Was it my imagination? Or was there a connection between this sudden flu and the oppressive cloud—as if an invisible tentacle had reached down to infect me with poison? I snuggled inside my jacket, shivering, and tried nesting into my seat, but the fabric was hard and tight.